Today’s the day. I was kindly asked by Taliesin Arts Centre, Swansea to curate a day of film to mirror the themes in ‘of time and the city’. I instantly ran through a handful of films that would perfectly fit the bill.
In a nutshell, I chose:

The Vanishing Street – 1962
I first saw The Vanishing Street as part of a Free Cinema event at Chapter Arts, Cardiff back in 2001, it resonated deep. Depicting the Jewish community and its market in east end London, this short film eventually reveals the plans for its demise to make way for a new housing development.

Only Two Can Play – 1962
Starring Peter Sellers and filmed in Swansea, Only Two Can Play is a comedy based on Kingsley Amis’s ‘That Uncertain Feeling’. I’m not sure when this film was last screened in Swansea, when it was first released? This in itself is enough is capture the imagination of Swansea residents to see their town on the big screen which was still in post war redevelopment.

How We Used To Live – 2013
It was easy to choose this 2013 film by Paul Kelly and sound tracked by one of my favourite bands St Etienne. A cinematic ode to the social history of London in colour from 1950 to the Thatcher era, brought together using film from the BFI archive. Perfection on celluloid. I can not wait to see this. With an added bonus of Ian McShane narrating, we all know how beautiful he was in the 1960s! This is also the first Welsh showing of this film. With big thanks to Bob Stanley.

Here We Go Round The Mulberry Bush – 1967
This film ticks all the boxes. It also happens to be in my top 3 films of all time. Apart from the groovy young things coming of age in smashing gear dancing to The Spencer Davis Group and Traffic. Here We Go Round The Mulberry Bush is set in the new town of Stevenage. Adolescent fun and games take place in the brand new homes and precincts of the town which are clean and full of optimism! Zoom Zoom! 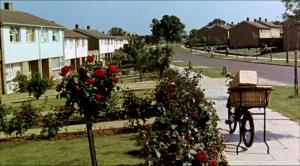