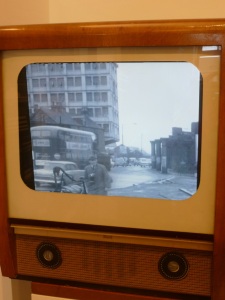 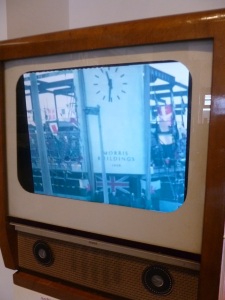 Here we have a few pictures of the colour archive film of 1950s and 1960s Swansea. I’ve been fortunate enough to have had exclusive access to hours of footage from the film archive at West Glamorgan Archive Service. I feel very privileged to have these films as part of ‘of time and the city’.
The films are shown within Swansea Museum’s 1960s television case, which is part of their collection and what a smart object it is too. The films and the case are a perfect match.

Visitors are coming in and spending time, having a cup of tea while watching these films and each person young or old have their own appreciation of the moving images on show. 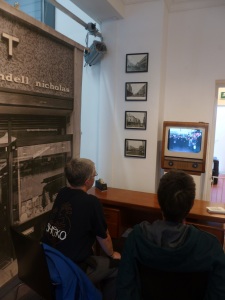 Some of the footage shows the 1966 centenary celebrations organised by the famous department store Lewis Lewis that was situated opposite Galerie Simpson on the High Street. It was a much loved store and my grandmother Gwennie Morgan also worked there in the drapery department in the 1960s.